The badge features a kookaburra and a modified version of the design is used in the Australian War Widows NSW logo.

AWWNSW founder Mrs Jessie Vasey OBE CBE was the originator of the idea for the design.

After broad consideration of a suitable symbol, it was decided the badge would feature the kookaburra – an industrious and cheerful bird who mates for life and is fearless and aggressive in the defence of its young and the territory it regards as its own. The bird also had a unique call, not a song but a laugh; a chortle of rollicking mirth (to bring the widows back to laughter).

The kookaburra is a typically and completely Australian symbol, one that could be worn proudly by every widow whatever her creed or ideals.

The kookaburra was also the mascot of the 7th Division of the 2nd AIF, commanded by Mrs Vasey’s husband, Major-General Vasey. 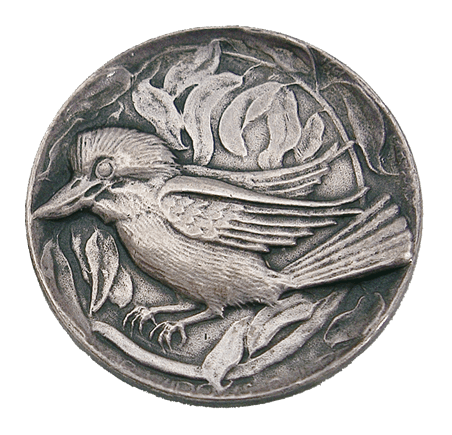 Mrs Vasey asked distinguished Hungarian sculptor, Andor Meszaros, living in Melbourne, to design a badge featuring this Australian bird. Mrs Vasey had met Andor Meszaros through a mutual friend. She knew not only the sculptor’s work but something of the man’s ideas and ideals. She knew of his conviction that the essential and most fundamental human principle was the handing-on of life and love from mother to child. In the light of so many war widows being left with children, this conviction had great relevance.

Andor Meszaros was born in Budapest in 1900, and educated in Budapest and Vienna where he graduated in building engineering and architecture. He then studied art and craft at L’Academie Julian in Paris, including the techniques of sculpture in stone, wood and metal. He came to Australia in 1939.

For the next thirty years he earned his living as the sculptor of bronze medallions, most of famous people, but also including the Olympic Commemoration Medal of 1956, and the Vietnam Service Medal of 1968. Over the same period, he produced some large and very beautiful works in various stones, marbles, metal, wood and clay. Among many others he did:

The badge became available for members in 1951, was made of sterling silver and depicted a kookaburra on a branch of gum leaves. The cost of the badge for members at the time was £1 and this, originally, gave them life membership. This concession lasted only a few years, due to the cost of running the Guild. Originally the badge was given to members for their use during their lifetime, and it had to be returned to the Guild when a member died or relinquished their membership.

To provide for the growing number of members, and the rising cost of producing the silver badge, a second badge was made. This is of the same design, but is slightly smaller than the original and is made of pewter.

AWWNSW has adopted the kookaburra design into its logo.

“The Guild badge of solid silver is a means of identifying the wearer as a bona fide war widow. Members are proud to wear this badge, it being a means of recognition between them, and it has often resulted in firm friendships being formed.”

“…an industrious and cheerful bird who mated for life, was fearless and aggressive in the defence of its young… (with) a unique call, not a song but a laugh; a chortle of rollicking mirth. It was a call to win the widow back to laughter.”

“Thank you also for allowing me to keep mum’s war widows brooch. I will always wear it on Anzac Day on my right hand side in memory of mum and all the amazing ladies who became war widows.”