A BRIEF HISTORY OF AWWNSW

The basic aim of the Guild was to teach war widows a craft (weaving, machine sock-knitting, etc) whereby they could, by the sale of articles made, augment their below-basic-wage-level pension. No less important was the desire to put widows in touch with other similarly afflicted women and provide a meeting place for them. Although it originated as a craft group, it was destined to become much more than that.

When the peace treaty with Japan was signed on 25 August 1945, 27,000 Australian servicemen had died, 10,000 of them leaving widows. Many war widows were left to exist on payments that were even less than the lowest Army pay. War widows received 50/- per week, while the basic wage was 96/- per week. It was in this environment the Guild began its work.

Weaving classes were the foundation on which the Guild was built. The Club and Craft rooms were located at Millers Point Drill Hall. Shortly after its establishment, the NSW Guild opened a craft shop in Sydney’s Rowe Street selling craft pieces made by its members. The lease of the shop at 19 Rowe Street Sydney was transferred to the Guild in November 1946. Craft classes were set up. As Mavis Thorpe-Clark points out in her book, No Mean Destiny, the quality of the work was undeniable. Sock and glove-making classes began and New South Wales was the first Guild to establish a craft shop. The handicraft school remained open until 1951, with the shop continuing to September 1960. It was a good money-spinner for the Guild.

The main object of the shop was to provide a market for the handicrafts of war widows and ex-service personnel, thus giving them an opportunity to supplement their pensions with the proceeds of work done in their own homes. Goods were brought to the shop for sale on a 20% commission basis, paid monthly. In June 1947 the shop was paying its way sufficiently to appoint a war widow as manageress on a small salary. The shop was also supported by voluntary assistants. Members who were able to operate sock-knitting machines were kept busy with orders for boys’ school socks, which were rarely obtainable in drapery stores. Hand-knitted children’s clothes were also made to order and there was a great demand. Other items were pottery, gloves, cane furniture and heat-proof table mats. The shop had a policy of changing its window display each week.

Again, from Mavis Thorpe-Clark: “As in Melbourne, there was a quality about the women who inaugurated the New South Wales Guild. Most of them had given their services voluntarily to social work during the war, many of them had had university training at a period when it was less than usual for even well-off families to give their girls tertiary education. Their work among the soldiers’ wives and families had shown them how many needed practical help.”

Mrs Florence O’Neill became the New South Wales Guild’s first State President and 100 members enrolled. She retired from office at the end of 1947.

Throughout the early years, Mrs Jessie Vasey campaigned tirelessly to improve the lot of war widows. “Our first job is to ask the powers-that-be for decent compensation for the family of the dead servicemen and our second is to put the widow back on her feet,” Mrs Vasey said.

Much of the Guild’s activities since 1946 has been devoted to improving the war widows’ lot in life, succeeding in gaining a number of entitlements for its members: the War Widows’ Pension, tax-free and indexed to the CPI; the Domestic Allowance; Income Support Supplement and health and medical entitlements.

Other successes have come in the form of concessions for transport, water and council rates and we have now free car registration and drivers licences. 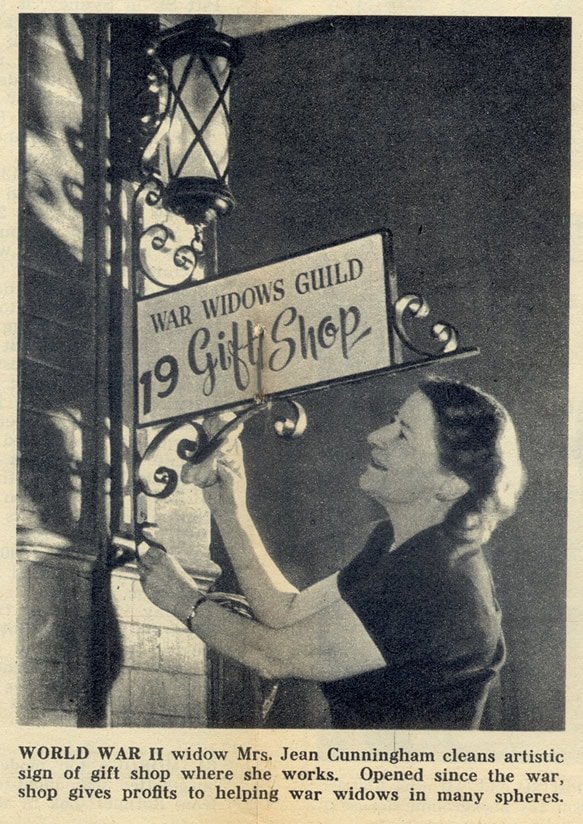 In 1951, Mrs Vasey undertook a country trip with Mrs A Cunningham, State President and Mrs Maylee Morrisey, State Secretary, opening Guild Clubs at Lismore, Grafton and Newcastle. The Lismore and Newcastle Clubs both continue today and celebrated their 60th birthdays in 2011. A network of Clubs was set up throughout metropolitan and regional New South Wales. These Clubs provide social contact, information, excursions and other activities for members.

Housing for widows and their children was identified as a major issue for the Guild from its earliest days. In November 1947, at the Guild’s Annual Conference, the then Minister for Housing, Mr Clive Evatt, announced that from December one of the Housing Commission’s homes per month would be allocated to a member of the War Widows’ Craft Guild. The first allocation was made to Mrs D Dawes, a widow with two children under twelve years of age who were unable to live with her. The second allocation was made to a widow from World War I, mother of eight children, three of whom were living with her.

This started the Guild’s involvement with providing housing for its members.

In 1953, the NSW Guild commenced purchasing properties to develop housing for its members and eventually established nine complexes around Sydney and the Central Coast.

To raise funds the Guild held fetes each year. In March 1949 a jumble stall was held at the Garrison Church in Millers Point. The first fete was held in 1953 at Marlborough House, Drummoyne, which had been purchased by the Guild to provide housing for its members. Fetes were then held at various venues including the Police-Citizens Boys Club at Burwood, Paddington Hall and the Abraham Mott Hall at Millers Point. Entertainment was provided and chocolate wheels, fortune telling, hoop-la, and pony rides for the children were features. The fetes were discontinued in 1995.

To keep in touch with its members, the Guild produced a News Sheet of four pages with a four-page cover from the early days. The News Sheets commenced in 1948. In 1957, the first issue of the The Digest was published. This publication is now a quarterly print magazine for members.

Anyone familiar with the War Widows’ Guild in NSW will have heard of its ANZAC Field of Remembrance, held at St Andrews Cathedral, Sydney. The Field was first established in 1952, and the 65th Anniversary was celebrated in 2016.

Australian War Widows NSW was for many years an incorporated association. In 1998, it was restructured to form a company limited by guarantee. The AWWNSW Board of Directors consists of six Member Directors and three non-Member Directors. 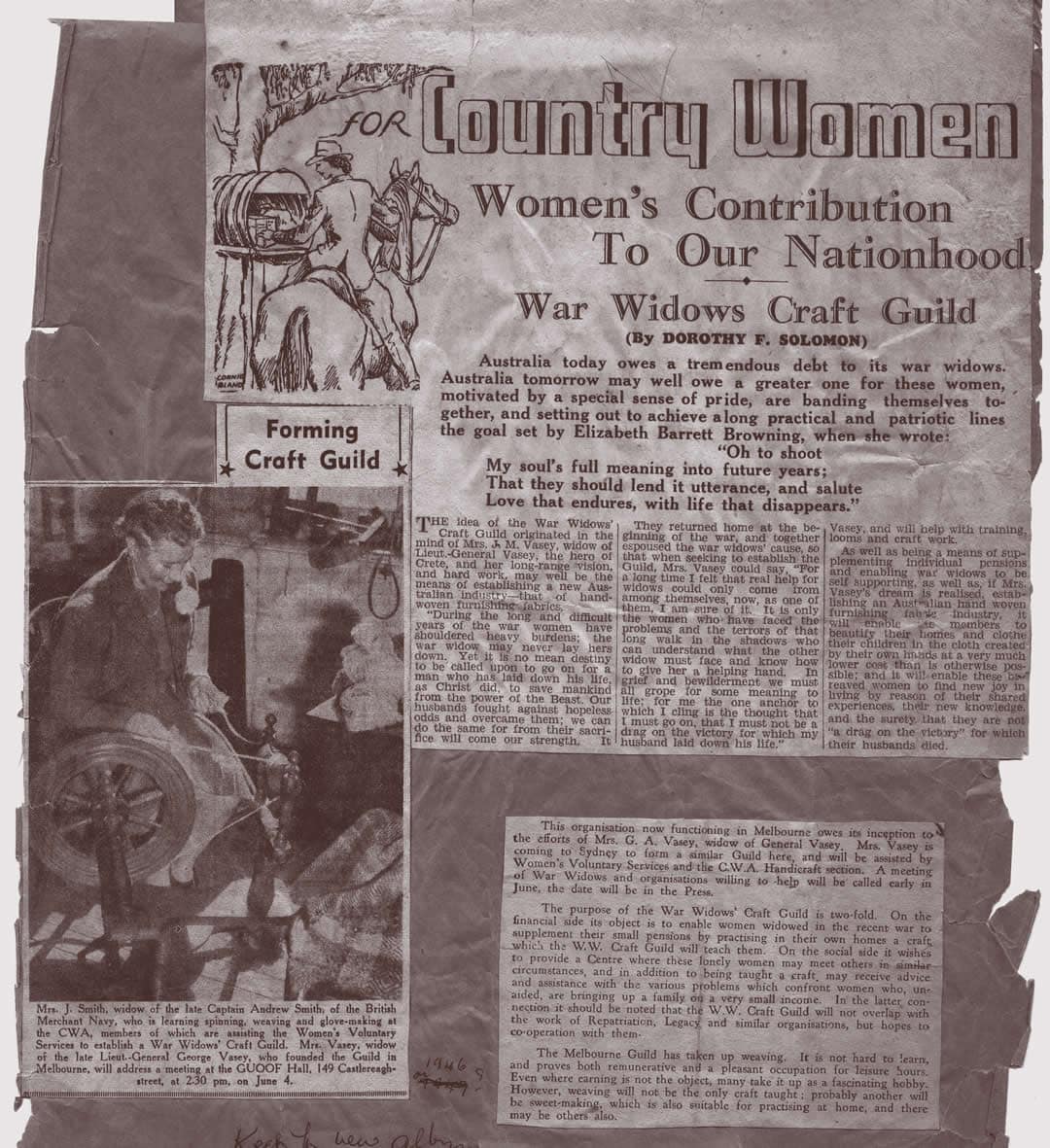