AWW NSW advocates for the needs of all women and families of veterans connected to Defence service. We provide a voice for our members and community to ensure their views are represented across all areas that impact upon them.

History of our advocacy

“A nation at war pays, and pays in full for every bullet and battleship it uses, but it makes no real attempt to pay for the lives which must be sacrificed for its survival… we, the widows, want to feel that we are not the broken flotsam of war, but people who can still add something to the life of the community.” Mrs Jessie Vasey, 1946

Advocacy, retraining and self-help were Mrs Vasey’s core goals in establishing the Guild. The NSW Guild commenced on 4 June 1946. Since then, the Guild’s advocacy has been rigorous and persistent, resulting in many benefits being available to war widows.

In the late 1940s and 1950s the Guild’s main advocacy drive was around pension entitlements, ensuring war widows did not have their pension withdrawn. We have read stories of war widows who had been ‘hounded and persecuted’ and had their pension withdrawn for immorality. In typical blunt, direct style, Jessie Vasey has been quoted as declaring “I don’t care if she sleeps with ten men a night” (No Mean Destiny). 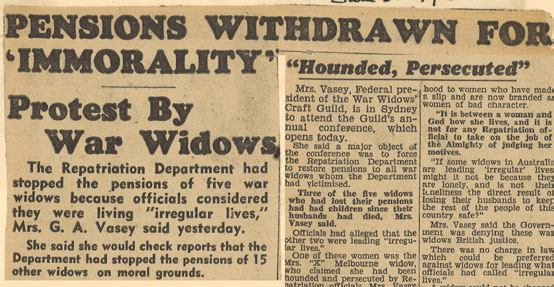 Government’s bureaucracy meant fighting for the pension to equal the minimum wage was “a constant battle… It depends on us to be the guardians of our own rights and guardians of our children’s rights” (Second Annual Report 1949 and ninth annual public meeting 1956) and fight for an increase.

There was no holding back by Jessie Vasey, an untiring battler for the widow’s rights; so passionate, that she wrote to the editor of The Duckboard: If I were Minister for Repatriation…I would not be Minister for long…” (see image).

Into the 1960s local council rates and transport concessions were the lobbying flavour of the decade for the Guild.

During the 1970s the pensioner medical services card and access to medical care were at the forefront of the Guild’s fight and it was supported by the Toose Report, an independent non-parliamentary enquiry into the Repatriation System.

The struggle was stepped up in the 1980s for more concessions – travel and free transport. The Guild was clever at rallying the membership to write to respective members of Parliament such that Barrie Unsworth begged of Una Boyce, “could you tell them (members) to stop writing now?” with a smiling reply from Una Boyce “not until we get the concession”… so what could a politician do but concede defeat? As a result, in 1985 free travel on public transport was heralded in with great aplomb in the same way that car registration and driver’s licence fees did five years later.

Changes to the Veterans’ Entitlement Act (removal of the limited period for pensions and continuation of entitlements for remarried war widows) were also a result of the Guild’s untiring efforts and campaigning.

The Guild maintained vigilance with many government departments to ensure benefits were maintained – Home Help Scheme was withdrawn and later restored.

Integration of Concord and Lady Davidson into the public health system was watched closely in the 1990s. At the same time, the introduction of the new tax system (GST), as well as concessions for motor vehicles, rates and taxes, was on the radar. The Guild continued to ‘watch over and protect the interests of all war widows’.

The new century saw remarried war widows in the limelight again, with those who lost their pension when they remarried, having their pension reinstated in 2002. The Clarke Review had notable success by unfreezing the ISS payment which had been unchanged since 1986.

The Guild worked with other stakeholders to successfully lobby for free Photo ID cards for war widows and pensioners, requiring changes to legislation and overcoming resistance.

The Guild watched closely the changes to legislation – the Military Rehabilitation and Compensation Scheme (MRCS) replaced the Veterans’ Entitlement Act (VEA) and the Guild monitored the potential impact on war widows.

Other causes wormed their way through the big issues – transport concessions, taxi schemes, bus services, rent assistance, seniors’ allowance. In 2004, $25,000 was awarded to ex-Japanese prisoners of war or their war widows. However, this legacy resounded through the ex-service community resulting in the payment being granted to all prisoners of war through persistence from the Guild, who banded together with other ex-service organisations to make a stand.

Over the last decade, the Guild has not waned in its advocacy for war widows: the Do Not Call Register, older driver licensing issues, access cards, council and water rates, breast screening, mobility parking, review of Productivity Commission, vehicle registration, taxis and the pensioner concession card to all war widows.

Persistence generally has paid off…”nagging is a very good weapon for a woman” (Eleventh Annual Meeting 1958) and has provided a certain degree of success for the Guild and its drive as an advocate for all war widows; even monitoring DVA’s language in letters to war widows for clear understanding.

As the need arises, advocacy is undertaken by Guild office bearers and senior staff through representation on committees and consultative forums and by liaising with appropriate government agencies and other organisations. The Guild continues to ‘watch over and protect the interests of all war widows’.

Significant advocacy achieved tangible improvements for war widows nationally and in NSW since 2000:

Other significant achievements include:

I often sing the praises of what War Widows have been able to gain for us over the years for I have been a member of perhaps over 30 years.